Proxy minions are a developing Salt feature that enables controlling devices that, for whatever reason, cannot run a standard salt-minion. Examples include network gear that has an API but runs a proprietary OS, devices with limited CPU or memory, or devices that could run a minion, but for security reasons, will not.

Proxy minions are not an "out of the box" feature. Because there are an infinite number of controllable devices, you will most likely have to write the interface yourself. Fortunately, this is only as difficult as the actual interface to the proxied device. Devices that have an existing Python module (PyUSB for example) would be relatively simple to interface. Code to control a device that has an HTML REST-based interface should be easy. Code to control your typical housecat would be excellent source material for a PhD thesis.

See the Proxy Minion Walkthrough for an end-to-end demonstration of a working proxy minion.

See the Proxy Minion SSH Walkthrough for an end-to-end demonstration of a working SSH proxy minion.

See Proxyminion States to configure and run salt-proxy on a remote minion. Specify all your master side proxy (pillar) configuration and use this state to remotely configure proxies on one or more minions.

See Proxyminion Beacon to help with easy configuration and management of salt-proxy processes.

The rest_sample example proxy minion has been updated to use __proxy__.

This change was made because proxymodules are a LazyLoader object, but LazyLoaders cannot be serialized. __opts__ gets serialized, and so things like saltutil.sync_all and state.highstate would throw exceptions.

Also in this release, proxymodules can be stored on the master in /srv/salt/_proxy. A new saltutil function called sync_proxies will transfer these to remote proxy minions. Note that you must restart the salt-proxy daemon to pick up these changes.

In addition, a salt.utils helper function called is_proxy() was added to make it easier to tell when the running minion is a proxy minion.

Starting with the 2015.8 release of Salt, proxy processes are no longer forked off from a controlling minion. Instead, they have their own script salt-proxy which takes mostly the same arguments that the standard Salt minion does with the addition of --proxyid. This is the id that the salt-proxy will use to identify itself to the master. Proxy configurations are still best kept in Pillar and their format has not changed.

This change allows for better process control and logging. Proxy processes can now be listed with standard process management utilities (ps from the command line). Also, a full Salt minion is no longer required (though it is still strongly recommended) on machines hosting proxies.

The following diagram may be helpful in understanding the structure of a Salt installation that includes proxy-minions: 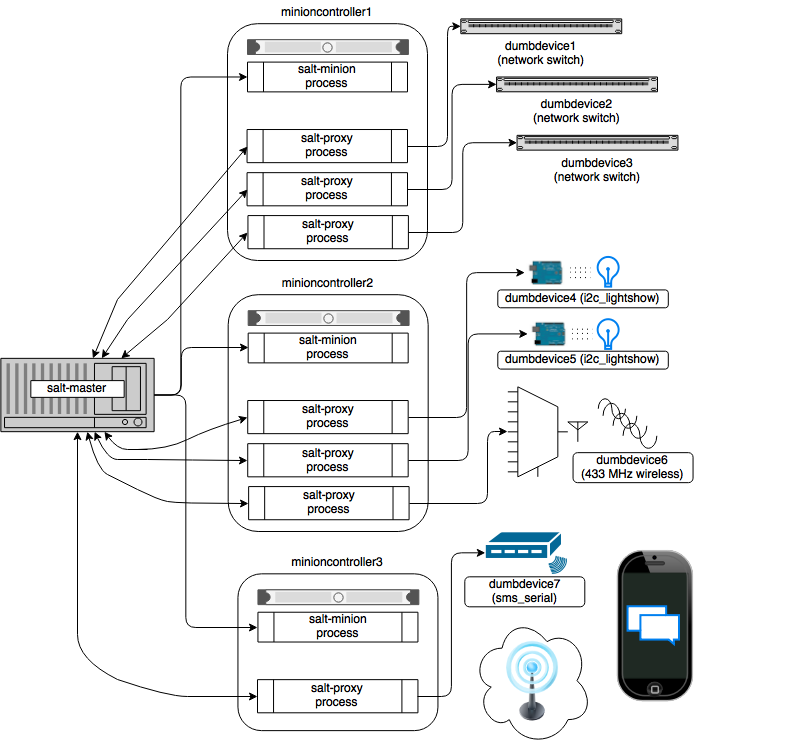 The key thing to remember is the left-most section of the diagram. Salt's nature is to have a minion connect to a master, then the master may control the minion. However, for proxy minions, the target device cannot run a minion.

After the proxy minion is started and initiates its connection to the 'dumb' device, it connects back to the salt-master and for all intents and purposes looks like just another minion to the Salt master.

To create support for a proxied device one needs to create four things:

Salt's Pillar system is ideally suited for configuring proxy-minions. Proxies can either be designated via a pillar file in pillar_roots, or through an external pillar. External pillars afford the opportunity for interfacing with a configuration management system, database, or other knowledgeable system that that may already contain all the details of proxy targets. To use static files in pillar_roots, pattern your files after the following examples, which are based on the diagram above:

Note the contents of each minioncontroller key may differ widely based on the type of device that the proxy-minion is managing.

In the above example

Because of the way pillar works, each of the salt-proxy processes that fork off the proxy minions will only see the keys specific to the proxies it will be handling.

Also, in general, proxy-minions are lightweight, so the machines that run them could conceivably control a large number of devices. To run more than one proxy from a single machine, simply start an additional proxy process with --proxyid set to the id to which you want the proxy to bind. It is possible for the proxy services to be spread across many machines if necessary, or intentionally run on machines that need to control devices because of some physical interface (e.g. i2c and serial above). Another reason to divide proxy services might be security. In more secure environments only certain machines may have a network path to certain devices.

A proxy module encapsulates all the code necessary to interface with a device. Proxymodules are located inside the salt.proxy module. At a minimum a proxymodule object must implement the following functions:

__virtual__(): This function performs the same duty that it does for other types of Salt modules. Logic goes here to determine if the module can be loaded, checking for the presence of Python modules on which the proxy depends. Returning False will prevent the module from loading.

init(opts): Perform any initialization that the device needs. This is a good place to bring up a persistent connection to a device, or authenticate to create a persistent authorization token.

shutdown(): Code to cleanly shut down or close a connection to a controlled device goes here. This function must exist, but can contain only the keyword pass if there is no shutdown logic required.

ping(): While not required, it is highly recommended that this function also be defined in the proxymodule. The code for ping should contact the controlled device and make sure it is really available.

Pre 2015.8 the proxymodule also must have an id() function. 2015.8 and following don't use this function because the proxy's id is required on the command line.

id(opts): Returns a unique, unchanging id for the controlled device. This is the "name" of the device, and is used by the salt-master for targeting and key authentication.

Here is an example proxymodule used to interface to a very simple REST server. Code for the server is in the salt-contrib GitHub repository

Grains are data about minions. Most proxied devices will have a paltry amount of data as compared to a typical Linux server. By default, a proxy minion will have several grains taken from the host. Salt core code requires values for kernel, os, and os_family--all of these are forced to be proxy for proxy-minions. To add others to your proxy minion for a particular device, create a file in salt/grains named [proxytype].py and place inside it the different functions that need to be run to collect the data you are interested in. Here's an example:

Salt execution modules, by, and large, cannot "automatically" work with proxied devices. Execution modules like pkg or sqlite3 have no meaning on a network switch or a housecat. For an execution module to be available to a proxy-minion, the __proxyenabled__ variable must be defined in the module as an array containing the names of all the proxytypes that this module can support. The array can contain the special value * to indicate that the module supports all proxies.

If no __proxyenabled__ variable is defined, then by default, the execution module is unavailable to any proxy.

Here is an excerpt from a module that was modified to support proxy-minions:

And then in salt.proxy.rest_sample.py we find

See above for a general introduction to writing proxy modules. All of the guidelines that apply to REST are the same for SSH. This sections specifically talks about the SSH proxy module and explains the working of the example proxy module ssh_sample.

Here is a simple example proxymodule used to interface to a device over SSH. Code for the SSH shell is in the salt-contrib GitHub repository

The init() method is responsible for connection setup. It uses the host, username and password config variables defined in the pillar data. The prompt kwarg can be passed to SSHConnection if your SSH server's prompt differs from the example's prompt (Cmd). Instantiating the SSHConnection class establishes an SSH connection to the ssh server (using Salt VT).

Output returned by sendline() is a tuple of strings representing the stdout and the stderr respectively. In the toy example shown we simply scrape the output and convert it to a python dictionary, as shown in the parse method. You can tailor this method to match your parsing logic.

The shutdown method is responsible for calling the close_connection() method of SSHConnection class. This ends the SSH connection to the server.